The Dutch went wild about tulips in the mid part of the 1630s, mortgaging their homes, their lives and just about anything and everything they could think of.  Numerous books have been written about it including Anna Pavord’s exhaustive Tulip, The Story of a Flower That Has Made Men Mad.

Passing reference to it have even been made in fiction books like Tracy Chevalier’s The Girl with the Pearl Earring.

In honor of Garden Blogger’s Muse Day (and my own bouquet, purchased last Wednesday and still going strong!) here is a wonderful poem about tulips by Susan Kinsolving.  I found it in a small volume called Among Flowers, which has wonderful paintings by Susan Colgan.

When Holland went insane, a tulip bulb replaced each brain.  Speculation soared.  Fortunes in florins would afford merely a bulb.  In shrieks, brokers bid paying dearly for “broken” petals of enflamed streaks.  Merchants offered the moon for one bulbil of Zomerschoon and called it “sport” when mutations might distort a Rembrandt’s variegation.  Everywhere fast money was made though skeptics said such a “Wind Trade” would never last, for the goddess Flora and her fools made folly of fiscal rules.  And each exotic tulip bearing an inflated price bore a virus transmitted by lice.  When overnight the crash came, no one dwelt on blight or blame.  Fusing fantasy, finance and flowers still seemed better than other worldly powers.  Inasmuch, God blest the Dutch. 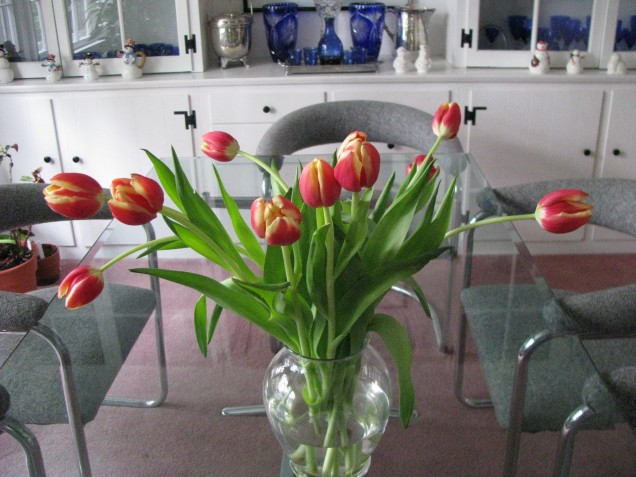 I spent an hour this morning shoveling heavy wet snow off the driveway.  It was about half an inch of snow that almost an inch of sleet and rain had fallen into–and then the snow plow came by and threw some additional water, mud and grass onto the bottom portion of the driveway for good measure!

The extra special good news is that we’re supposed to have 2-4 more days of this delightful weather.  I’d welcome just plain old snow at this point–the snow blower can handle that.  This stuff is too wet for the snow blower and too little to bother bringing “kahuna” as my husband refers to the snowblower out for anyway.

So although I have a motherlode of houseplants–probably about 130 or so although there may be more–it was definitely time to bring in some spring color.  The tropicals over by the dining room table weren’t quite cutting it anymore 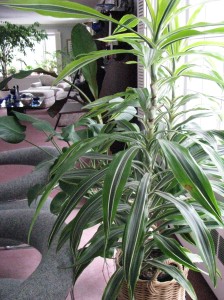 , the ficus and all the foliage behind it weren’t doing me any good, and while the lemon tree was just lovely, its fruit is still months away from being edible. 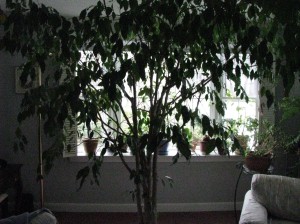 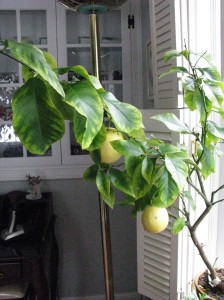 So what I really needed was an old fashioned burst of spring color.  I went out and got a bouquet of tulips.  They’re lovely now and will be even better in a day or so when they open up.

Tulips are the only cut flower whose stems continue to grow after cutting.  This leads to some interesting–and sometimes undesired–results in a vase.  I’ve heard all sorts of remedies for this–an ounce of vodka in the water in the vase, piercing the stem of each tulip with a pin while the stem is underwater and so forth.  My favorite was told to me by a street vendor: 3 copper pennies in the vase; the older the pennies are the better.  I’m not sure if it works, but I do add the pennies to the vase.  I’ll usually get at least a week from a bouquet of tulips–but I do enjoy them as they gradually elongate and begin to look like a Van Gogh painting! 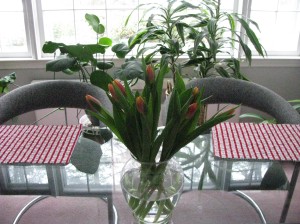