Lately the media has been all about the Brood X cicada hatching. I am fortunate that they do not make it far enough north to trouble me (one of the very few benefits of living in the frozen north–we do not get any sort of periodical cicadas, just the ordinary dog day kind).

But of course, that doesn’t mean we don’t have insects. And Memorial Day weekend is just about the time when we start having insect damage. This year has been a bit unusual because the weather has alternated between unusually cool weather and unusually warm weather. So the cool weather insects are trying to hang on a bit and the warm weather insects are here too. It’s like an insect bonanza on the plants–although I am sure they don’t think so!

For example, aphids, which are normally a cool season insect on roses, are still here. They rarely hang around this long.

And this damage indicates an insect that is just about invisible to the naked eye–the rose sawfly larva. It’s a caterpillar-like creature that is nearly the same color as the rose leaf and it sucks the juices from the leaf–that’s what the little scrapes on the leaf are.

Luckily, up here in the frozen north, we only have one generation of them a year so I do no type of organic control on them at all. They can really disfigure the leaves a bit, but it’s only for a couple of weeks, and then the shrubs put on some nice new growth and all is well.

And this cute little semi-circle is made by the leaf cutter bee. They take out the leaf parts to line their nests in hollow wood. They are native pollinators so it’s important not to use chemical pesticides on your roses–and that includes those “wonderful” systemics that they sell that do everything from kill insects to keep fungus away.

What do you think is harming the pollinators? Please stay away from stuff like that! If public rose gardens can manage themselves organically, so can you!

I find that the same insects recur at the same time yearly. Once you know what to look for, it’s almost as easy as predicting when those periodical cicadas will be back.

For some of my longer time readers, you may remember this photo from last year.

This is this year. And sadly at least one or two more of those roses is going to have to go. What’s happened? A nasty virus called rose rosette. 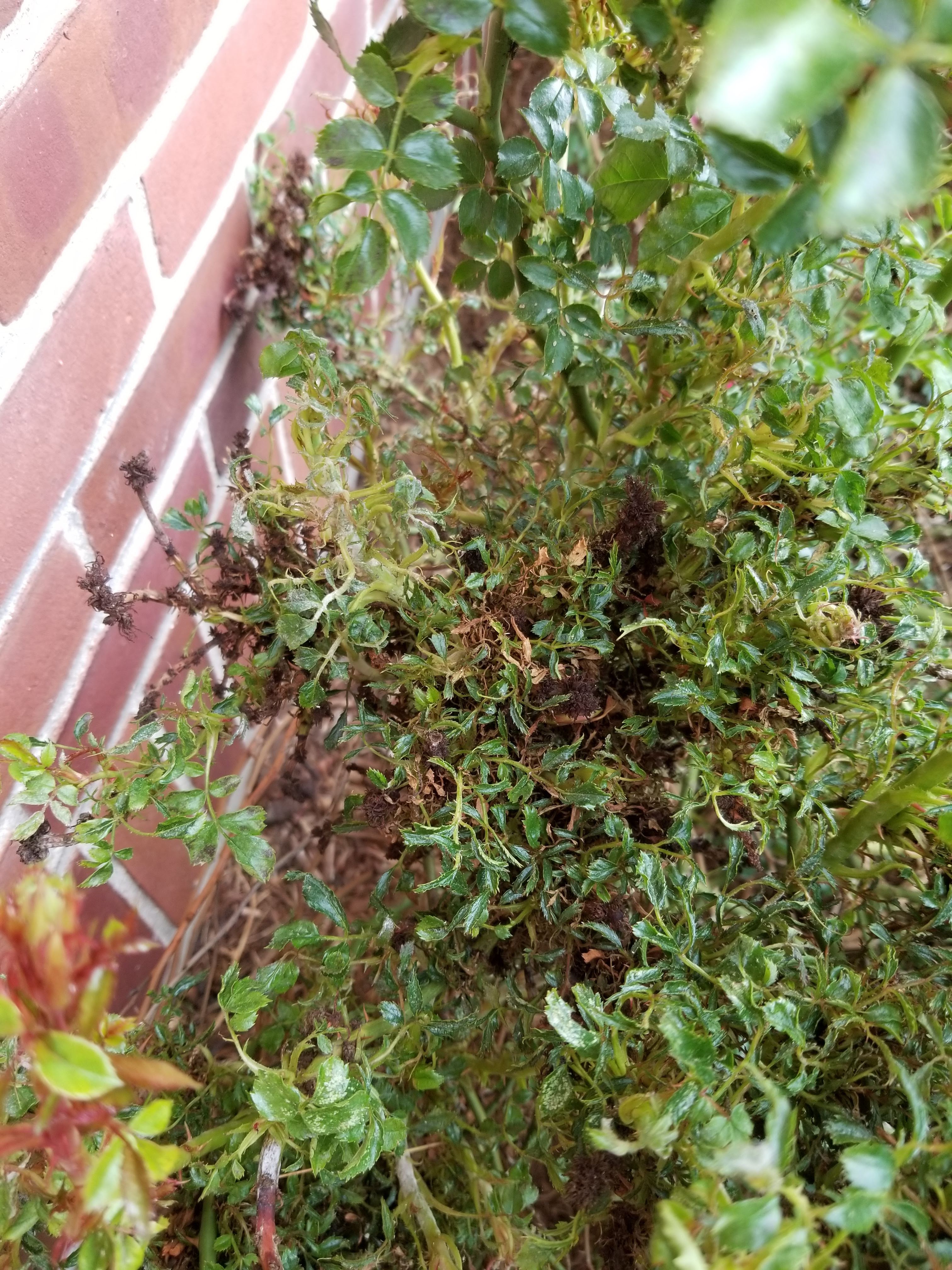 There aren’t really any good photos of what this virus does to roses. It is spread by a microscopic mite–so no chance to see the damage until after it occurs.

Last year the roses looked beautiful. They came out of dormancy this winter looking stunted, with witches’ brooms and oddly twisted foliage and I started ripping them out.

After I filled a whole dumpster with them, I realized that I hadn’t gotten them all, which is how I was able to get a few photos. So I have to go back and take out at least 2 more.

Obviously we will not be replanting roses here, which is kind of a shame because they were happy. Oh well. At least the roses got the virus and not us!

Ah, here it is Friday again and I am posting about bugs. This is getting to be a bad habit.

This is something that usually happens in late April for us. Aphids are a cool season pest for us, so we will get them in late April (usually) and then again in the fall. I most often ignore them completely because they are usually only on new leaves and once it warms up, I will have a nice robust population of ladybugs to deal with them.

Well, we have had record cold so far this June so I decided that I had better take some preventative measures until the ladybugs got here.

What did I do? I dragged a hose down to this garden and hosed off the plants. 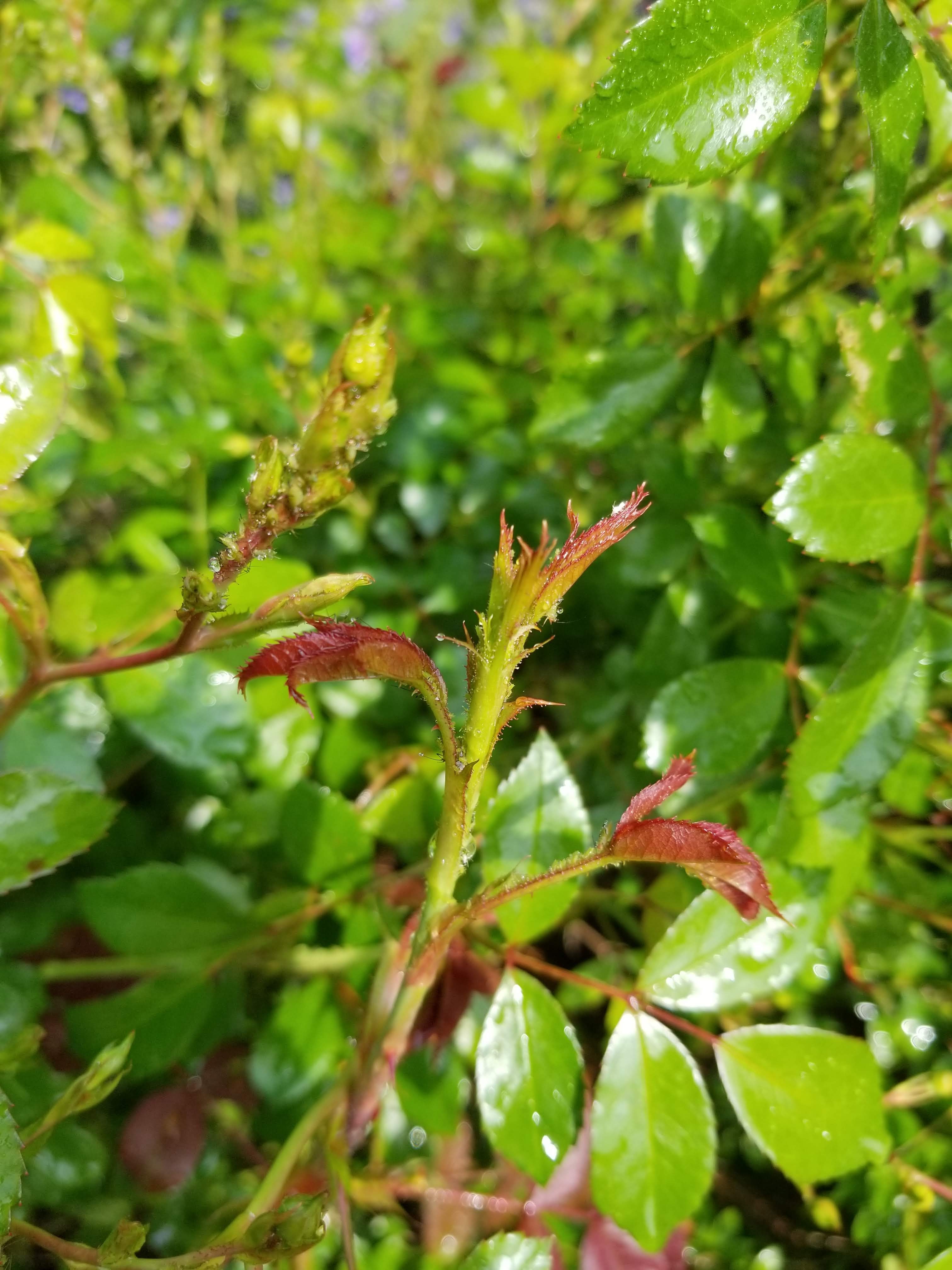 This is the result. The aphids are almost all gone. You can see that the front shoot has been hosed off and the back one has not–it is still full of aphids.

I would probably not have done it if I hadn’t seen aphids with wings. That told me that the population was so high that it was about to move on to other plants. Since only half the rose garden was affected at this point, I thought it best to try to keep it that way.

Aphids are freaky insects. They are all female and they can be born pregnant with the next generation already waiting to be born.

They come in various colors to better blend with your plants, but green and black are the most common by me.

They are born wingless, but when the population on a particular plant gets too high, they’ll grow wings and migrate to a new plant.

Luckily, they are quite easy to hose off. And once they are knocked down, they don’t generally return to trouble the plant. So I don’t expect to have to deal with this again–at least until fall, at which point, I usually just ignore them. 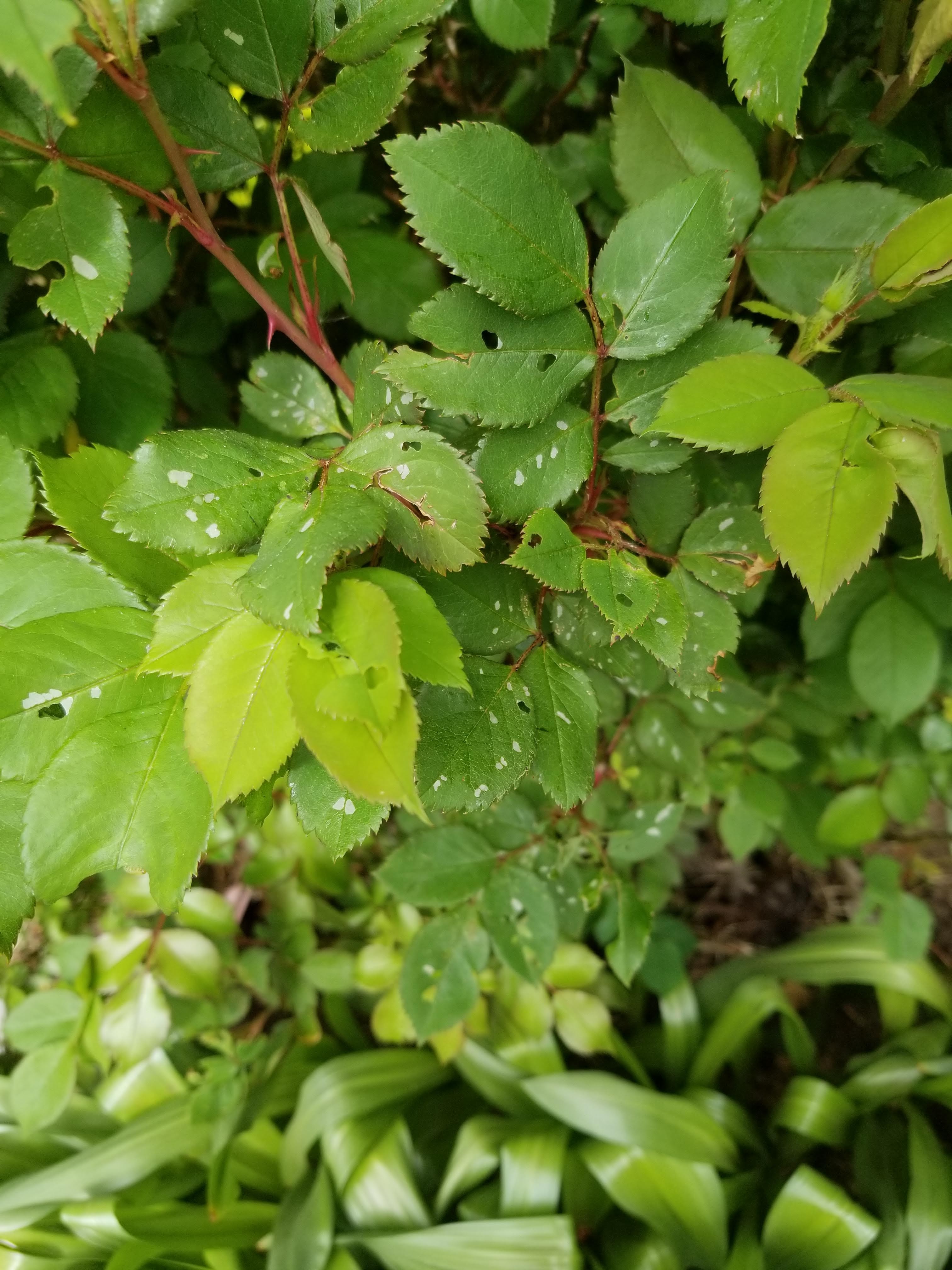 First things first: the “little caterpillars” that you see on your rose leaves aren’t really caterpillars. Yes, I know that’s exactly what they look like, but they’re not.

If you recall my “holiday gardening” post about 2 weeks ago, I said that in my climate there were some sawfly larva that showed up between Mother’s Day and Memorial Day in my climate. And here they are. 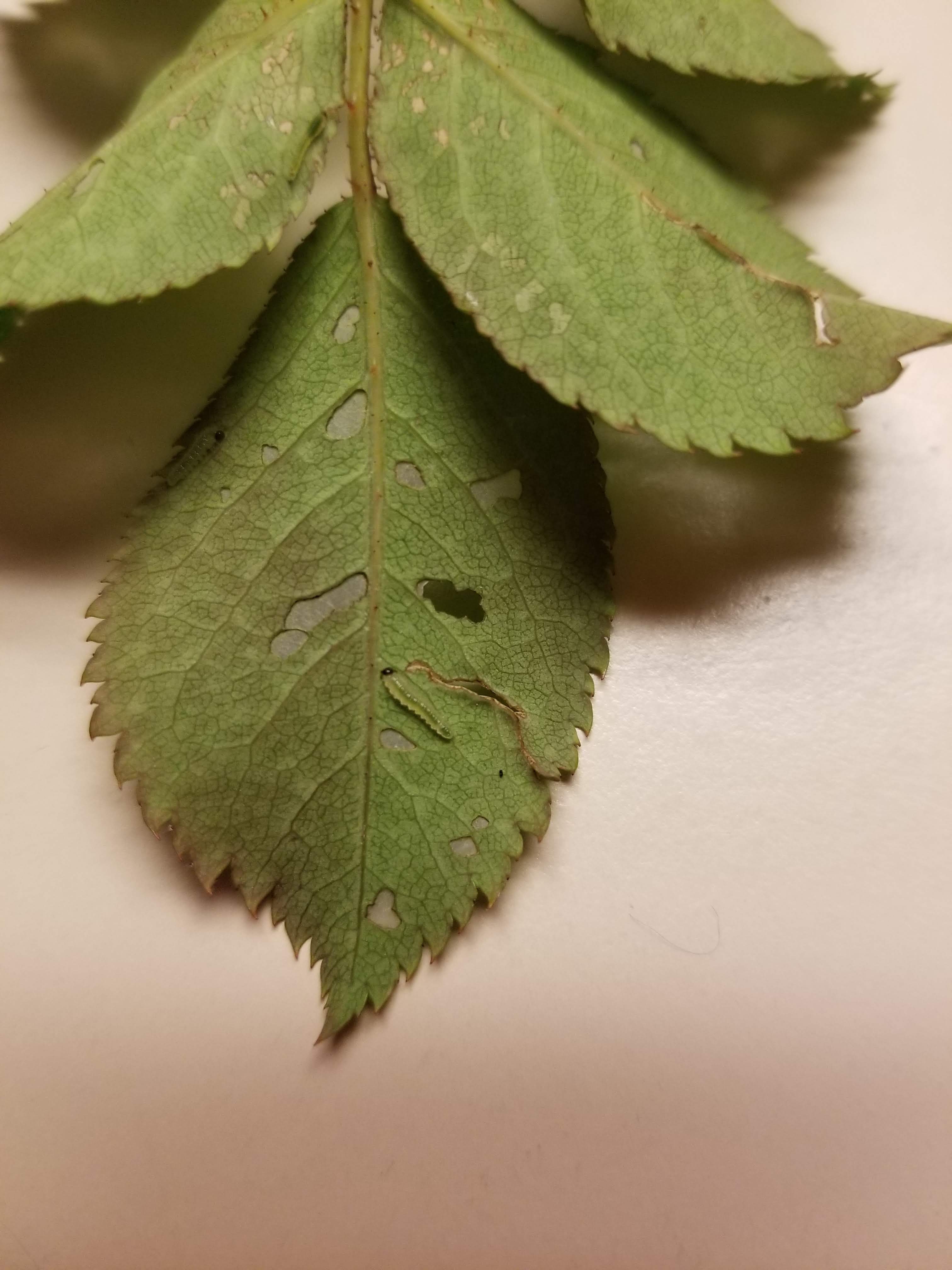 This is the rose sawfly larva. It showed up the Friday of Memorial Day weekend. You see that on this leaf (and look closely, because it’s a tiny caterpillar the same color as the leaf. It is on the petal nearest to you) the leaf is just beginning to show a bit of damage. More in a moment about that.

Why is it important that these aren’t caterpillars? For organic control purposes. If you want to spray (I generally don’t; I just let the roses get slightly disfigured because there’s only one hatching of these a season in my part of the world)–you can’t us BT which only works for caterpillars.

Also if you do spray, they tend to hide beneath the leaves, so be sure to get the undersides. 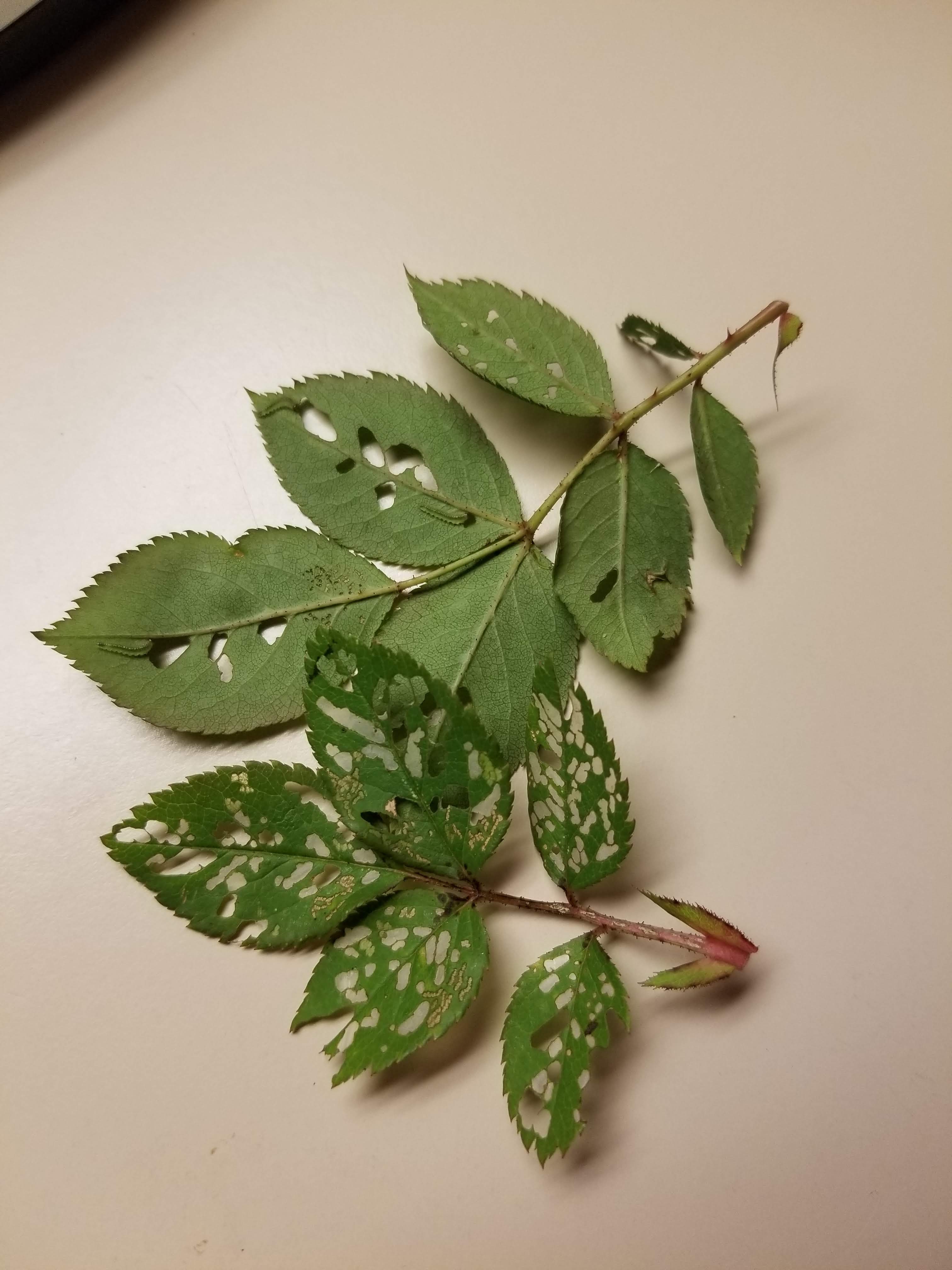 Otherwise they will leave your leaves disfigured (with these scrape marks that then often get burned into holes by the sun, making it look like some other disease or insect has been there). Don’t be fooled.

The two sets of leaves in the above photo show early damage and more advanced damage. The top set is the earlier damage, although even there, some of the scrapings and holes have been burned or eaten through the leaf.

As you can see in the bottom photo, the mouth scrapings made by the insect are browned by the sun. It’s not a good look.

What can you spray? Insecticidal soap is a nice remedy for soft bodied insects. Just remember to spray in the evening or first thing in the morning before the heat of the day and before most of your beneficial insects might also be accidentally sprayed.

This rose foliage may not look all that unusual to you. I meant to take a photo all summer and then cut out this cane. The fact that it’s still there tells you that it’s been a difficult gardening year for me.

Actually when I went to take the photo today, I took it in 3 different versions. I wasn’t sure what would show you how unusual this is relative to what’s around it in the dead of winter.

If this photo doesn’t work for you, perhaps this next one will. 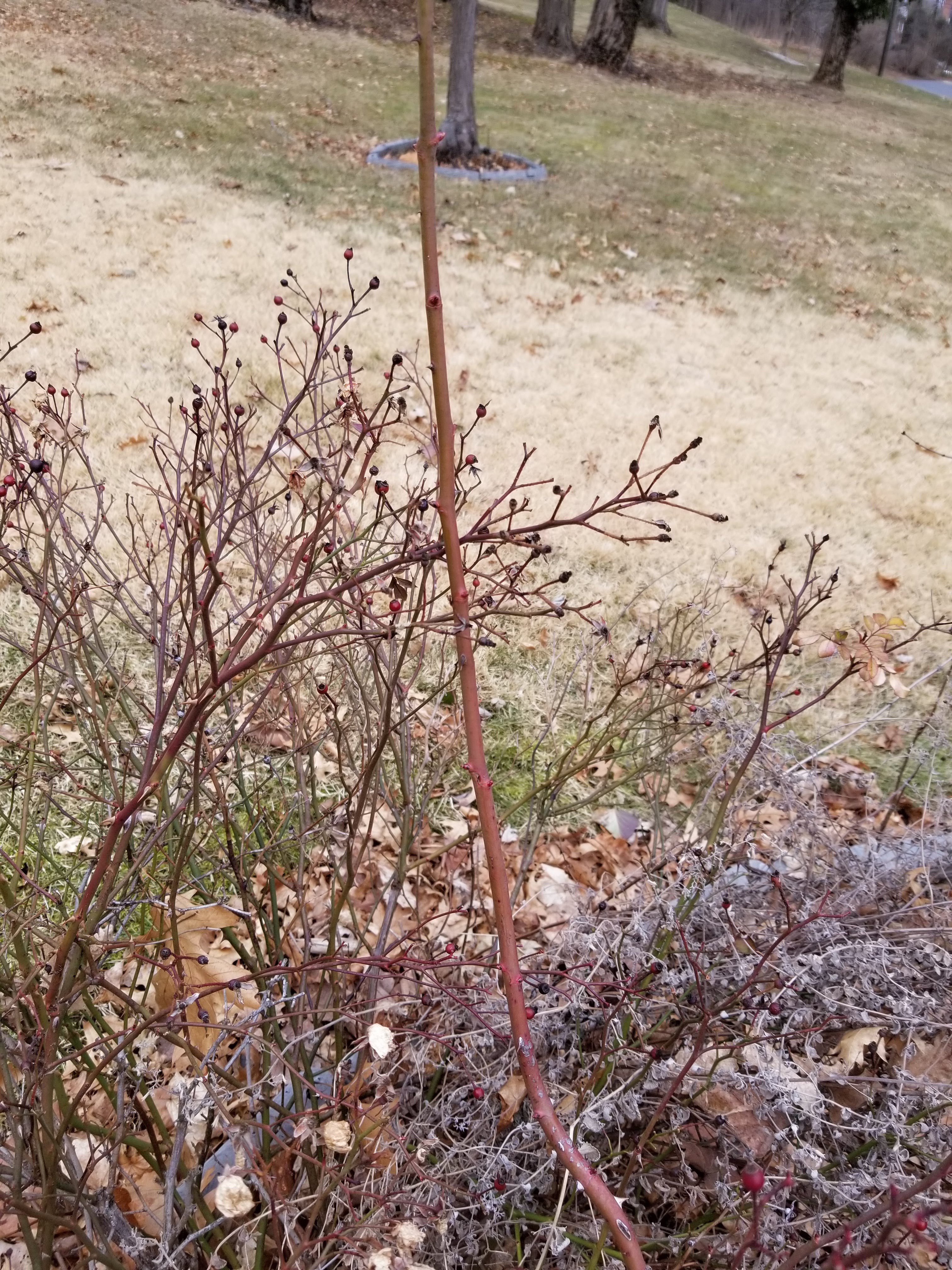 Yes, that straight cane–and the well branched canes with the tiny rose hips behind it–are on the same plant. Now I think you can see the problem.

The long straight cane is obviously a sport or mutation that needs to come out.

I would tell you that it was the rootstock trying to assert itself, but I believe that this is a rose grown on its own roots (as opposed to many roses which are grafted onto hardier rootstock in which this sort of thing can happen).

In any event, this long mutant cane needs to be pruned out now before it causes harm to the rose.

By “harm,” I mean taking over or possibly passing disease.

This is a priority for me very early this year. 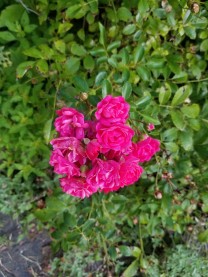 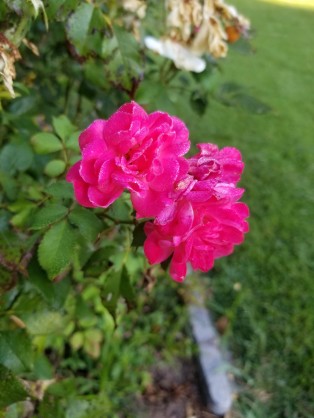 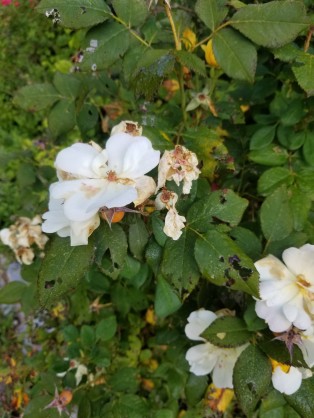 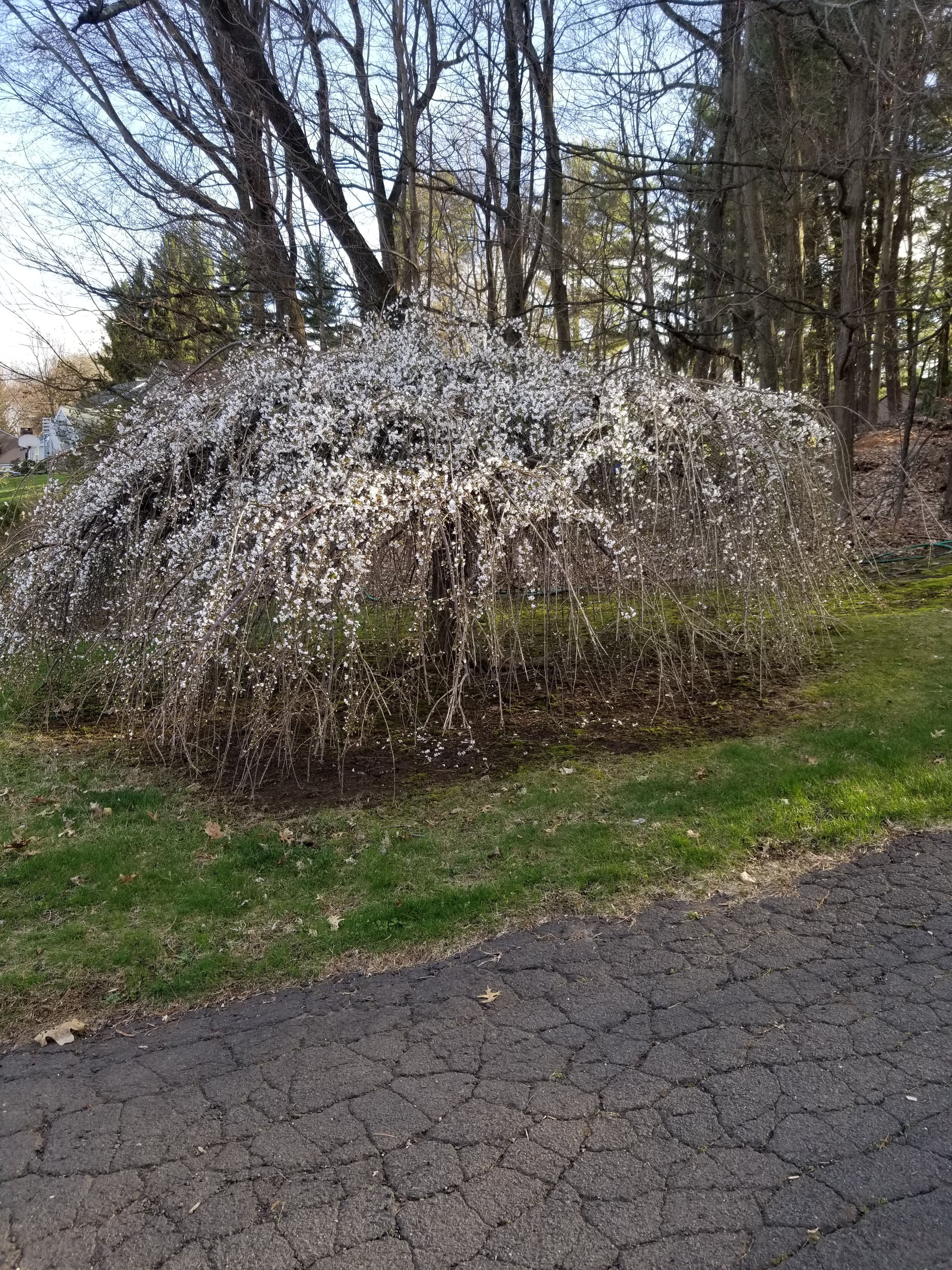 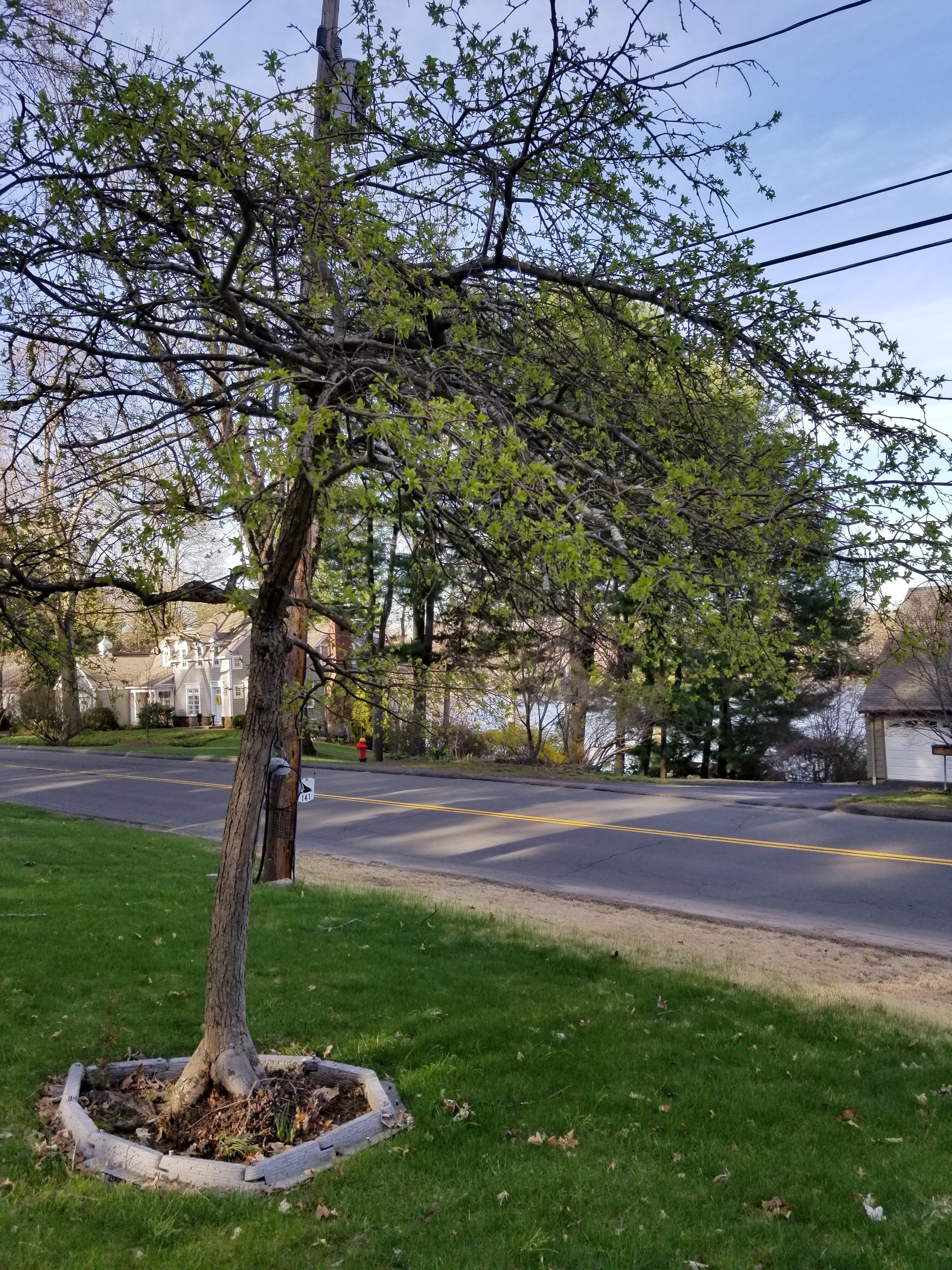 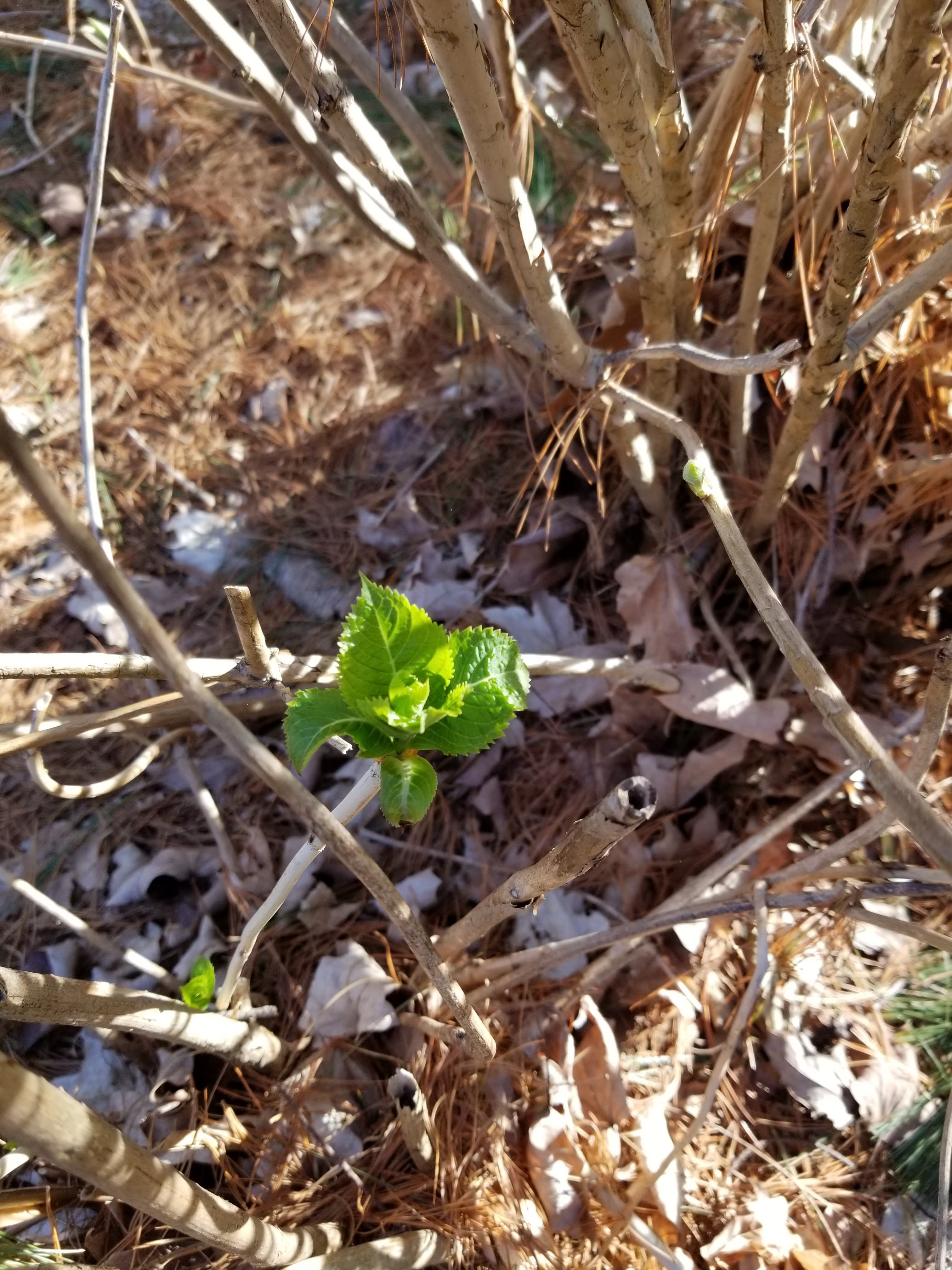 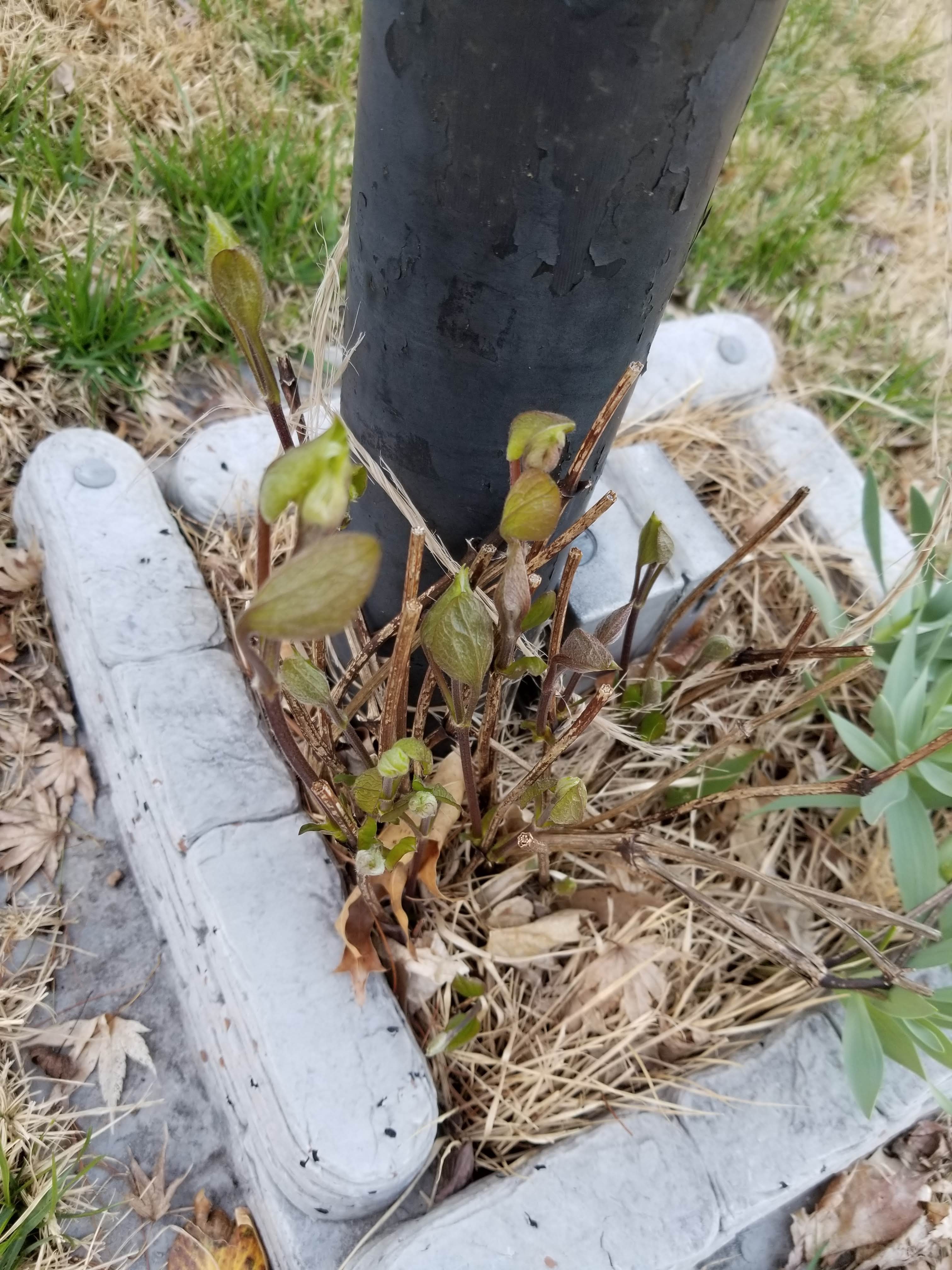