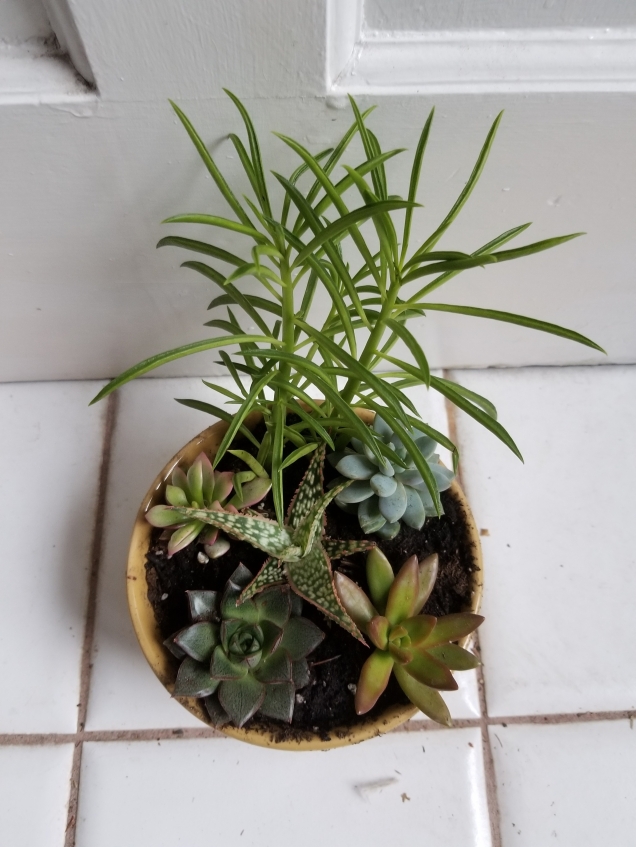 For those of you lucky enough to live where you can grow these outdoors in the ground, just skip this post altogether. This is for those of us who resort to growing these little plants (which quite naturally would grow in arid and semi arid parts of the world) in little dishes, pots and trays.

What took me aback the other day was when a frequent commenter on my blog remarked on the fact that my “house plants” actually do live in the house for 9 months of the year.

I have remarked here before that the Spoiler has told me that I live in the wrong climate. He usually says this after we have taken a trip to somewhere much more temperate than our own “frozen north” climate (as I uncharitably refer to Connecticut, which is actually quite mild by comparison to say, Buffalo, New York, or any part of Minnesota). While on that trip I will have undoubtedly pointed to any number of plants and remarked “oh we have this” and “we have that,” and when he asks where, I will tell him which particular window of our house it’s residing in–in other words, all those plants are not in our garden, but are house plants! So I really need to live in a climate where I can grow more of what I love outside!

But I digress. You see my little bowl of succulents, above. All of the plants in that bowl are succulents. What, exactly is a succulent? It is a plant with fleshy leaves  for  water storage.

Therefore, because these leaves store water, you don’t need to water the plants as often as you might a plant with “regular” leaves that just lose moisture through transpiration. You’ll also want to ensure that these plants are planted in a potting mix that is drains quickly–often cacti and succulent mix is specifically sold for this type of plant.

So that’s what a succulent is. What is a cactus? 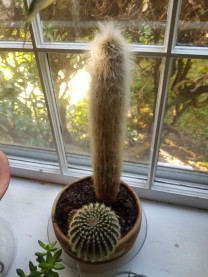 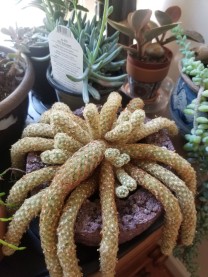 At first, you might be confused because the definition sounds remarkably similar to a succulent. A cactus is usually defined as a plant with succulent stems or branches with sharp spines or points and single flowers. Basically the difference between succulents and cacti are the absence (or presence) or spines and the type of flowering.

I’ve included photos of some of my cacti, above, so you can see the “spines versus just just fleshy leaves” difference. Sometimes photos make all the difference in explaining these ideas.

It can be more complicated than that, of course. Succulents and cacti grow in different regions of the world, often; they do belong to different genuses; and some succulents will have single flowers as well (but not the sharp spines of the cactus so that you won’t be confused).

But the most important difference is in care. Because cacti are from an arid region, they will generally want water less often than a succulent (although be careful about this–I have been known to kill cacti from too little water! Most people over-water their cacti. I am probably one of the few that starve them for water!)

While cacti love full sun, they can sunburn next to a window if they get too dry.

And they too want very fast draining potting mix.

So with these basic (and they are basic!) definitions in mind, perhaps you’ll be able to better care for your succulents and cacti.