On Monday I talked about hydrangea arborescens, a type of hydrangea that blooms on new wood. Once upon a time they were called snowball hydrangeas because they only bloomed in white. As my lovely hedge of pink hydrangeas shows, that’s no longer true. That variety is called Invincibelle Spirit. It was one of the first of the pink arborescens varieties. There are now deeper pink varieties, and “ruby” varieties–everything gets “newer” and “improved” in gardening.

But of course there are other varieties that bloom on new wood as well. One of the first that I have had was an old fashioned variety called “PeeGee” (which is short for paniculata grandiflora). The “old-fashioned” or non-hybrid types of these shrubs can get quite large–up to 20 feet tall and wide at maturity.

Of course, most of us don’t have lovely old mature specimens like this because we’ve planted them in the wrong spots so we are always cutting them back–which we can do–in the spring.

Newer dwarf varieties might only grow to 6-8′. This is my neighbor’s shrub. You can see that this is a later flowering variety as well. It only begins to bloom in August or so here in the frozen north, which is nice because not a lot is going on in the garden at that time. 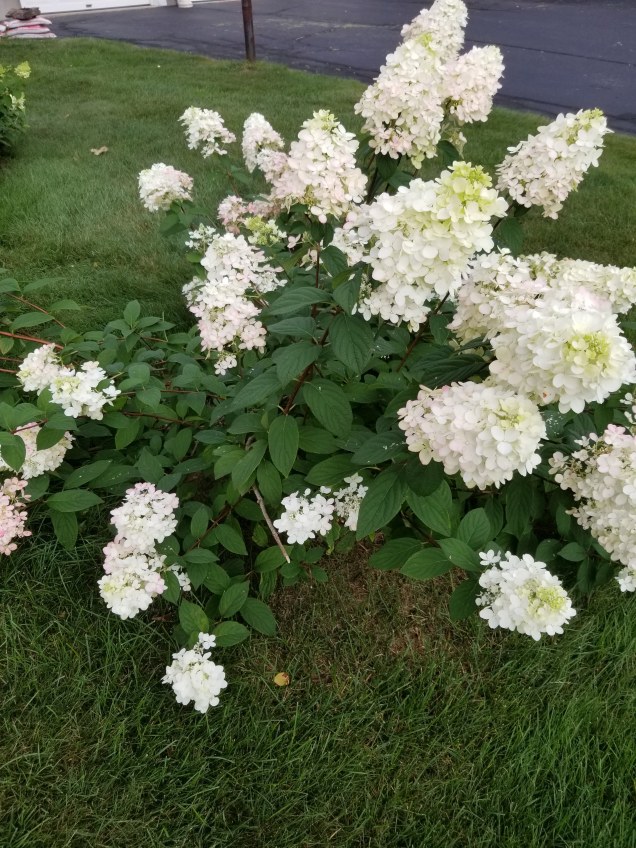 Other cultivar types–which have a similar flower and leaf structure–are finishing up their bloom about now in my climate. Again, this is my same neighbor’s shrub. You can tell the blooms are nearing maturity by the blushing pink color they are taking on. I am not sure which cultivar this one might be. There are a few that are pink, like Vanilla Strawberry, Fire Light or Strawberry Sundae  but this one doesn’t appear to be those–it’s not pink enough. It’s still quite lovely though!

And the beauty of these is that if deer nibble them, or snow (or your snow plow) damages them or whatever might happen over the winter (should you live in the frozen north, as I do), it’s just fine. They do come back and bloom on new growth.

These plants are hardy to Zone 3, by the way, so they’ll take a lot more cold than my climate can dish out. They will also grow as far south as zone 8 (which these days isn’t as far south as we think). But again, in warmer climates, I know they’ll want more shade than we give them where I am!