I used to have a border of rudbeckia in my wildlife garden. But as in any monoculture, it gradually became a habitat for four lined plant bugs that disfigured the foliage. When other insects started chewing the petals off the bright yellow flowers, I ripped the whole thing out.

Of course a few have self-sown, but because there is no monoculture, and because they are mingling nicely with other plants (if not actually being overtaken by my supposedly dwarf hibiscus syriacus) I don’t have the problem with insects anymore.

Interestingly enough, the insects that eat the flower petals seem to have found a container with some annual daisies in it. Almost as fast as the daisies open, their petals are gone.

Here’s a closer look at the damage. 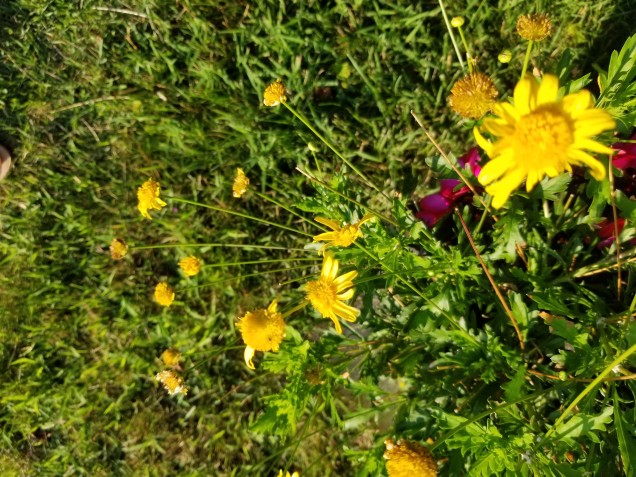 What’s causing this? In my case, I am sure it is earwigs. They are about the only pest of the numerous possibilities that I know that I have in abundance.

If you are seeing this sort of damage and aren’t sure what might be causing it (and don’t think earwigs are a possibility for you) some other possible causes are the notorious Japanese beetle, or believe it or not, striped or spotted cucumber beetles, which are pests of far more than cucumbers.

I did find a cucumber beetle of the striped variety in my vegetable garden (where I am not growing cucumbers) but 1 beetle is not doing all my damage, surely. I think he ventured over from a neighbor’s yard and probably went right back.