I always say that my backyard pond is the one place in my yard where I spend the most time and do the least amount of work.

That definitely isn’t true on the weekend when I have to clean it, however. It’s an “old-fashioned” pond–pre-formed, not liner with rocks on it, so that in and of itself causes a lot of issues. 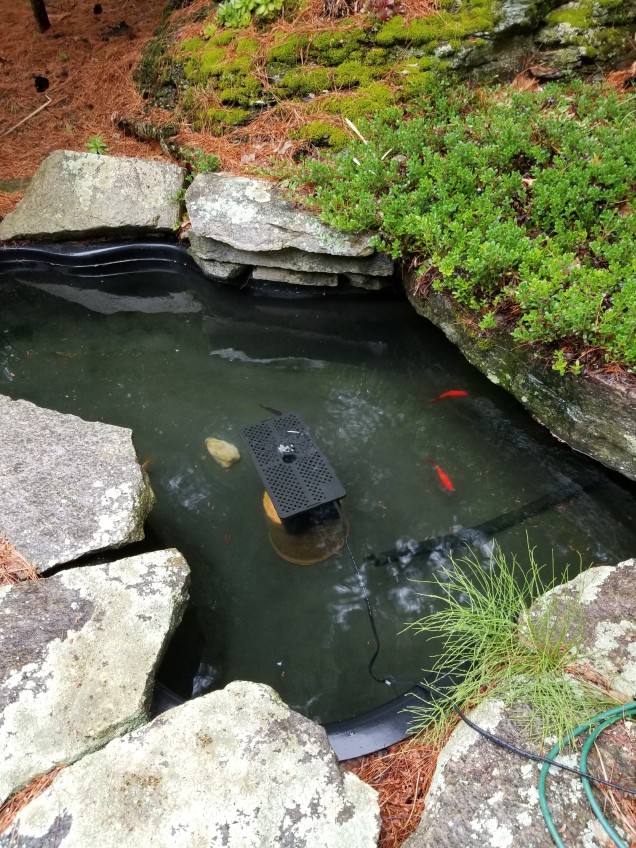 It was put in over 35 years ago–before they knew about putting in filters and building filters into the waterfall feature–so I have to plop a filter box onto the bottom to house the pump.

But despite all the drawbacks, it works to keep some smallish fish alive, even through New England winters. And the sound of moving water definitely helps you to feel cool on a hot day!

The fish are probably 12-13 years old–I’ve lost count now–and when I was cleaning it this year, I found a 2 year old that I didn’t know that I had. So that’s always a nice bonus. We’ll see if it lives long enough to grow into an adult, although if it’s made it this far, chances are good it will survive.

I don’t generally put plants in the pond anymore although I used to. The photo at the top of the post is from several years ago. The fish, rooting around in the gravel and the mud just made a much bigger mess for me to deal with when I was cleaning. I want the fish to eat the algae that forms–and there’s plenty of that–and any bugs that might fall in. Obviously it works or the fish wouldn’t have survived this long.

I also don’t use that fountain feature. The birds loved it a little too much. They would try to perch on it, which was really funny to watch, but then they would tip the whole fountain and pump over if they were heavy enough–think something like a mourning dove.

Even the robins would sometimes knock it over flying too quickly around it. So it had to go.

But the end of the day, to sit beside the pond is one of the best things in life.

2 thoughts on “The Fish Can See Clearly Now”