One of the benefits of living in a place with four seasons is that the cold weather kills over-wintering insects and weeds. Usually.

In years with milder winters, fewer insects and weeds get killed. Therefore, while we humans may enjoy the benefits of a warmer winter (I know I did–I won’t speak for everyone), the bugs and the weeds do as well. 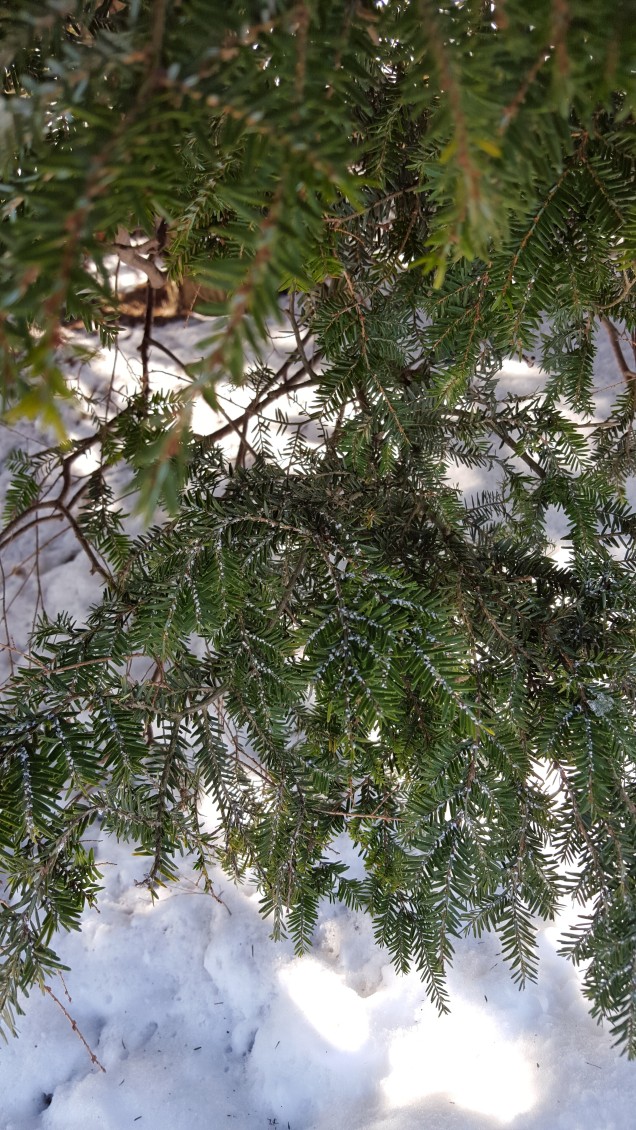 The photo above is evidence–already–of something to be alert for as spring nears. This is a neighbor’s hemlock. I just happened to notice it because the dog likes to stop and sniff it on our daily walks. It’s covered in that pest, the woolly adelgid (for those unfamiliar with that charmer, it’s the little white spots all along the spines of the plant–almost like an outdoor mealy bug, but smaller.)

Another thing I expect to see–since our last warmer winter was only 3 years ago–is an abundance of early annual weeds like chickweed. I am already seeing evidence of perennial weeds like dandelions and have been regularly all fall and winter. There’s just something wrong about seeing dandelions in December, January and February!

So what do we do? Well, since this is an organic blog, you know I am not going to advocate for pesticide for the weeds. It’s not going to be effective in the cold weather anyway.  For the few weeds that are around,  if the ground thaws on a warm day, simple hand pulling is a great way to deal with them–and it gives you something to do during those crazy 60 or 70 degree days when there’s really not much else we can do (in my climate anyway).

For the adelgid, those folks might want to consult an arborist. I know there are certain oils that can be sprayed, as well as insecticidal soaps but I am not sure of the timing. Spraying too early and too late in the season is ineffective and can harm the plant and lead to run-off that can harm waterways. No point in that.

As with most things in life, timing is everything.

2 thoughts on “Consequences of a Milder Winter”