On Friday I talked about an extreme tactic that I used over the summer to nurture an area where I was fostering fledgling ferns and some moss. I permitted a weed to remain as a living mulch.

I’m sure a lot of folks just shuddered at the whole idea. But that area is perpetually weedy anyway–and it’s difficult for me to weed on a large scale basis because of the perennials that are there, the moss that I hate to disturb, and the bulbs that come up in the spring. So I definitely tolerate a much higher lever of “weediness” than a lot of other gardeners might.

That’s one of the places I practice “weed triage:” if it’s going to seed, I rip it out immediately. If not, I get to it when I can.

But in many other places in my gardens, I use actual plants–and not weeds–as living mulches, to conserve moisture, shade plant roots, or to otherwise cool an area. Here are some examples. 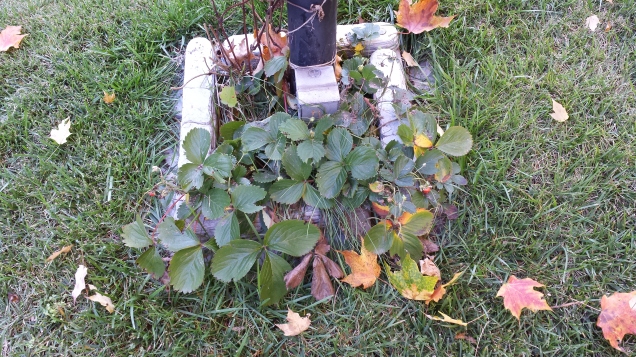 Everyone talks about how clematis like “cool feet,” right? Well, what better way to achieve that than by a planting? It’s so much more decorative than some broken bits of wood. And if the planting happens to be edible, like these strawberries, so much the better. Since when did anyone say that we couldn’t grow edibles with ornamentals? (Remember, we don’t use chemicals on our lawn. Don’t try this if you’re fertilizing your lawn with chemicals. The runoff–or over-spray from your spreader–would poison your berries!)

Roses are notorious for needing a lot of water. And these are sandwiched between a driveway and the road–a very hot area, but one of the few places I have enough sun to maintain them. So how do I do it? I grow catmint as a border. It achieves several things. First, it seems to act as a natural Japanese beetle repellent. Next, it’s quite lovely with them, and easier to grow than lavender in my heavy wet clay soil. Finally, it serves as a bit of a living mulch on top of the soil.

I do try to keep it away from the rose plants themselves as much as possible to minimize disease. But catmint, being a mint family plant, goes where it wants to and by the end of the summer will often be entwined with one or two of the roses. So I just do a very hard cutting back in the spring.

Finally here is bearberry, growing in my waterfall garden. It softens the edges, gives the small wildlife and birds some edible berries, is evergreen, and rarely needs maintenance. I also grow chameleon plant (houttuynia) in this garden as well. But because this garden is so hot and dry (now there’s a change!) not only does it fare poorly, but some years, like this one, it burns out and dies! The bearberry does fine with no supplemental anything–and it grows right over onto the granite rock!

So for those of you who were shocked by my “weed as living mulch” post, try one of these nice plants instead. You’ll probably be much happier with them!