Last Friday I wrote that I had been seeing fewer bees than usual. Then my natives all came into bloom at once, thankfully.

Here’s a field of black eyed susans. They don’t seem quite as popular with the bees as some of the other plants but I know the goldfinch will be over them when they start to go to seed so I’m not worried.

This is probably my second most popular bee plant in the garden right now. It’s a yellow form of butterfly weed (asclepias). It attracts everything–the bumblebees you see, honeybees, the smaller pollinator bees and of course I originally planted it for the monarchs. I thought I had lost it because it was so slow to come back. None of my other 3 asclepias species did come back.

This is the ultimate bee plant in my garden. It is constantly covered with bees. At the time I took the picture–maybe 90 minutes before sunset–there were mostly bumble bees–but they were laden with pollen. It was a great sight to see.

As I was about the leave the garden, I saw that my rose of sharon leaves were being nibbled by something. When I stepped in to take a closer look, I found not the culprit, but this: 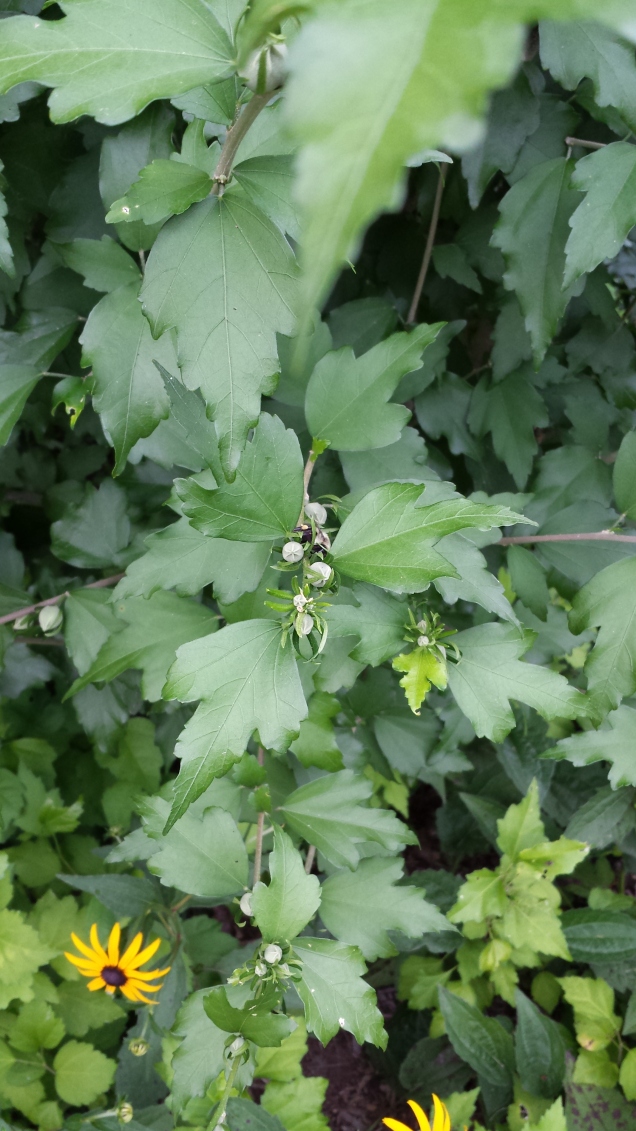 It’s difficult to see from the photo–it’s by the upper cluster of buds–and I didn’t want to disturb an already confused bee–but I watched this bee very clumsily climb into this branch. It appeared confused and disoriented and seemed as if it would likely stay the night there–except why would it do so laden with pollen. Very troubling.

Even more troubling, I have found 2 dead bumble bees on my driveway. What is causing these bees to drop from the sky, dead, onto my driveway? I’m horrified. One bee I’ll just chalk up to old age or an accident. More than one and I’m getting worried. Now this third confused bee and I’m sure something is going on. Very sad.