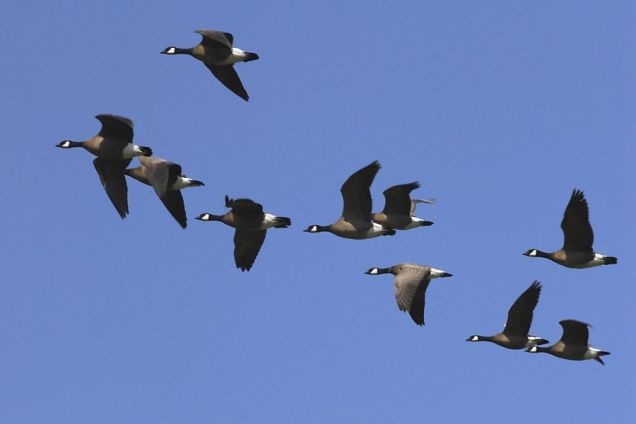 You may wonder why we call them “Canada Geese,” or as some folks call them incorrectly, canadian geese, when they don’t seem to have much to do with Canada but they stay right here in the United States.

Well, only some of them stay here.  One of the signs that fall is coming to most parts of the country is the migratory flocks of Canada Geese flying over, in their classic “V” formation, honking their little heads off.

The “V” formation actually helps them achieve better speed and less wind resistance–I learned that from a biology professor who stated that no action in nature is ever wasted.  He didn’t really have an explanation for all that honking, though–that seems like wasted action to me.

There are 3 distinct populations of Canada Geese–two are migratory–the honking “V”s we see flying over–and one has become resident.

The resident population is actually protected by Federal law from hunting.  Special exceptions must be made to allow hunting of the non-migratory geese.

It is not exactly known what has caused the resident population to become migratory but protection from predation and hunting, and the proliferation of their habitat–grasslands in suburbia and office parks surrounded by lakes and ponds–is believed to be the cause.

I’ve been a birder since childhood but I’ve only recently learned the story of the 3 distinct populations of Canada Geese.  I read about it in my state wildlife magazine, Connecticut Wildlife, I heard a very good story about it recently on Bird Note, on NPR and of course I’ve had the biology course where I heard about “nothing being wasted in nature.”

There are some very good resources out there for amateur naturalists to learn more about nature and wildlife.  It’s always good to get more informed about these things.